Congratulations to two of the gentlemen of racing, Tom D’Arcy and Vincent McCarthy, for their continued success with their terrific broodmare, Sodashy (2008 Noverre x Leopard Creek). 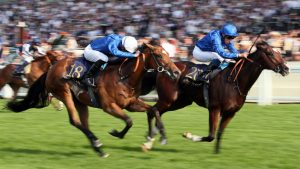 Sodashy’s 2018 colt foal by Mehmas sold for 60,000 Euros the week after the consistent Talk Or Listen (2016 by Alhebayeb) became her second black type performer coming third in the Listed Prix Delahante over 10f at Marseilles Borely. Interestingly, this represents something of an increase in stamina over the previous 3 siblings.

Sodashy is currently in foal to Kodiac, which is something to look forward to as a repeat of the mating that produced Roussel.